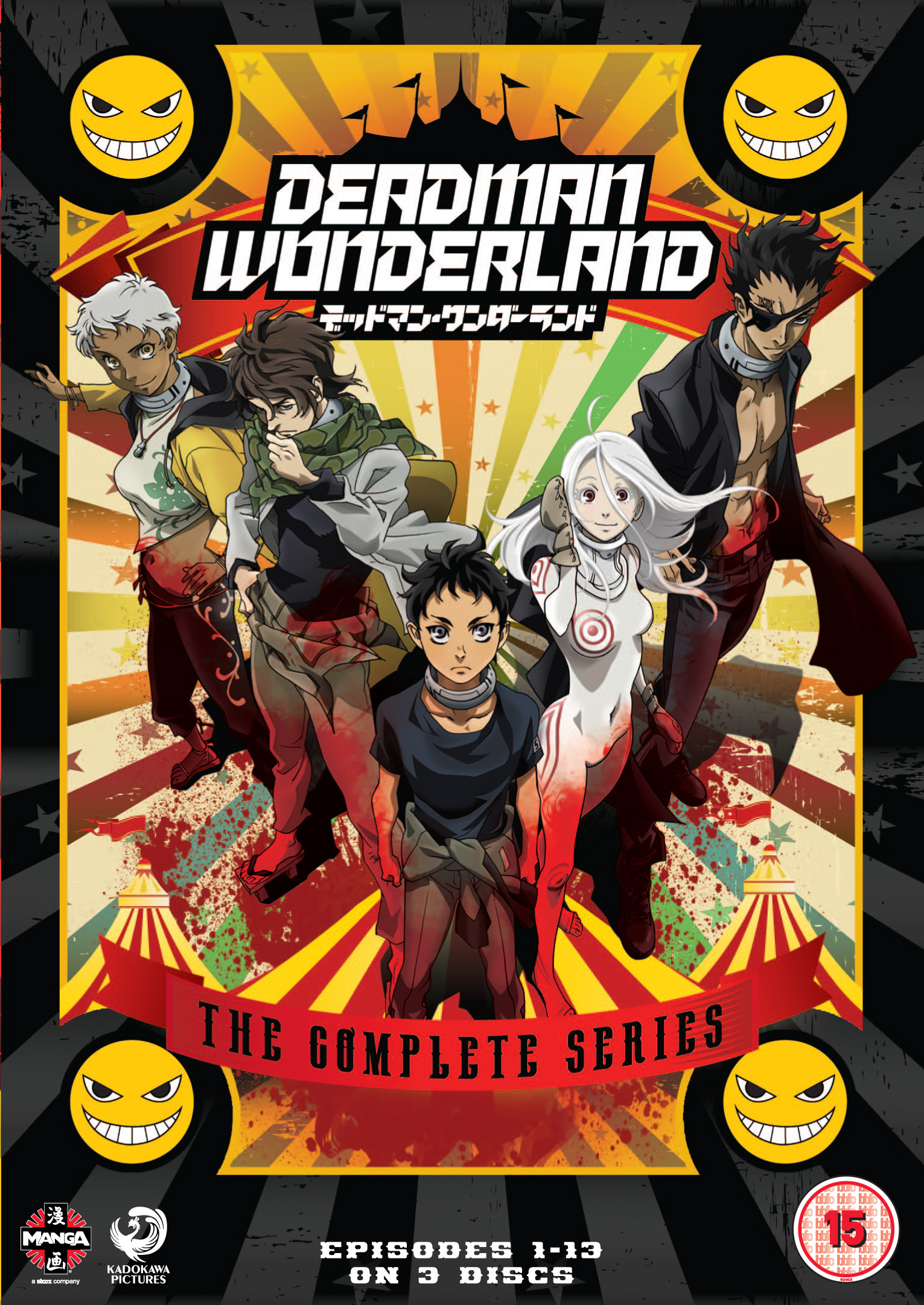 In my opinion, the worst kind of show you can watch is the kind that clearly shows promise or potential to be a really good show but is ultimately squandered by inadequate execution. This is squarely where Deadman Wonderland fits in. A show that could have, should have, been so much better than it ultimately is.

Almost all of the issues come from the story. So much so, in fact, it is hard to even know where to begin describing how much of an utter disaster the story is in almost every aspect. I suppose the best place to start is the most damning flaw; just how eager the writers are to set up plot points and mysteries but not addressing a single one of them. For example, the very premise of the show is the protagonist, Ganta, is set up for murdering his entire class. This alone poses so many questions. Why was Ganta set up? Who was the mastermind? Who is the Red Man, the person who actually committed the murders? None of these are answered. Not one. I think they imply it could be Shiro, Ganta's friend who he meets in prison, at some point but it's just completely brush past it and don't go into it in any kind of detail at all. Then there are a ton of other mysteries and the like set up too! Throughout the entire show, they show Tamki, the tyrant in charge of the prison, clearly up to something, but never really explain what. Then there are the connections Shiro clearly has with him and his father, who she even fights at one point for reasons that are not explained at all. Hell, they even, just once, show Shiro apparently has some sort of split personality or something that, say it with me, is never explained or addressed. If that is all to do with her being the Red Man, then it just spawns even more questions! Then there is also the fact Shiro and Ganta have met during childhood at some point that may or may not be related to why Ganta was framed but is barely even touched on at all.

The second issue with the story as a whole is just how bloated and over stuffed the show is. I can only assume that this comes as a side effect of adapting a long Manga into a short series because Deadman Wonderland just rattles through ideas and concepts that could have taken up 12 episodes in itself but instead chooses to whizz through them, giving each different set up only an episode or two before hurrying along to the next. The first episode or two acts as set up, which is fine and to be expected. Next they have only 2 episodes of everyday life in Deadman Wonderland before they set up the deathmatches between prisoners which would have been cool for a fair few episodes to see what kind of different powers all the inmates have but nope, only 3 episodes for that. At this point, they then switch to a jailbreak plot which also could have filled a lot of time, perhaps running alongside the other two ideas, either the deathmatches or just every day prison life, but instead they just focus entirely on the jailbreak which doesn't even get an episode of planning or anything like that. Literally, the episode the idea is introduced in they start to execute the Jailbreak. It's ridiculous. Then that only lasts two episodes before going into an even more rushed second jailbreak attempt that takes the show to its wholly unsatisfying conclusion. You know an ending to a show is awful when, if someone didn't know episode 12 was the last episode, you'd have no idea the show was finished. It just ends on a completely normal ending. There is absolutely nothing in terms of closure. Oh, and I'd be remiss if I didn't mention the crowbarred in plot of one of the prison officers trying to find out what Tamaki is up to which ultimately goes nowhere and how Yoh, who is a fairly prominent character in the first half of the series, is just completely forgotten about. As in, at some point, he just stops showing up. It's absurd.

Third, there are some, although admittedly not too many, plot holes and plot conveniences that just really bugged the hell out of me. Like if G Block is specifically made for people with special powers and Tamaki knew that Ganta had special powers, hence why he falsified evidence to imprison him, why was he not put in G Block right away? If he didn't know Ganta had powers, why would he go out of his way to imprison him? It makes no sense. Then there is the fact the Tamaki goes backwards and forwards on whether or not he wants Ganta dead like 3 times. At first he tries to kill him, then he wants him alive to participate in the deathmatches, then he tries to kill him by sending his group of anti-deadmen called Undertakers (which are also very ill explained) after him! It just bewilders me. Then there is the fact that they set up the plot point of the prisoners needing to eat some kind of candy to stay alive every three days only to ignore it completely until it's relevant to the plot.

I'm willing to give it the benefit of the doubt here and assume at least a few of the points here are actually wrong and the show might have answered or resolved some of these things and I just missed them or something like that but, for me, this is easily one of the most poorly written shows I have ever watched, anime or not, in terms of its story. It's just a complete and utter failure. I'd have guessed they thought they could secure a second season or something like that but if that was the case, why would they feel the need to rush everything? I have no idea.

It's probably at this point worth mentioning that I definitely think the story could have been good. I really love the concept, it reminds me a lot of the Black Mirror episode White Bear or Death Race but just way more wacky and over the top in the way only Anime can really. If the show had double the amount of episodes, if not more, and took their time exploring each of the ideas present and resolved all the loose plot points and mysteries gradually over the course of the series then I think it really could have been fantastic.

All that aside, however, I still found Deadman Wonderland to be fairly good overall as everything else isn't as nearly as troubled as its story. For example, the show has some pretty good characters. People on this site know me enough by now to know that I have such a soft spot for any overwhelmingly cute or naive characters and Shiro just really fits the bill. In a lot of ways she reminded me of the titular Chaika from Coffin Princess Chaika, really kick ass in a lot of ways but very childish and naive, not to mention cute and I just loved that. I haven't looked into it but I get the feeling that I'm more than likely in the minority here and most people will probably find her annoying as all hell but I personally loved her. The protagonist, Ganta, is likable enough and gets a pretty good character arc. At first, I thought it was going to go for the whole crybaby to badass kind of thing but although Ganta does get more powerful throughout the show and starts standing up for himself more, he never really stops being a whiny crybaby which I thought was different enough to make it stand out and feels more realistic than someone just becoming a stone cold killer if they were so weak and wimpy before, so that was pretty enjoyable. Yoh, who is arguably a main character, really could have used a bit more development and screen time as, like I said before, once he accomplishes his personal goal, he legitimately just disappears from the face of the Earth. The villains were pretty weak on the whole, with Tamaki being kind of bland and Azuma, the leader of the Undertakers, just being evil for evil's sake and just goes kind of nuts at the end for no real reason. Again, maybe it's better in the Manga where (I assume) they have more of an opportunity to flesh everyone out.

I think one of the biggest downfalls of the show, which is of no fault of it's own, is the censorship present. The action on display here is absolutely fantastic and really fun to watch and the show is probably one of the most gory, violent and visceral anime out there in theory but all of the good stuff is censored by black gradients and white glows which is not only hugely distracting but takes away from one of the main reasons a lot of people might want to watch Deadman Wonderland in the first place. It really is a crying shame the show didn't sell well enough (which is the reason for the censorship) but I can't help but feel if the quality of the story was better, it might have been liked more, causing it to have sold better and ultimately wouldn't have had this problem in the first place. Oh well.

On the animation front, I think the show looks really quite nice. Deadman Wonderland is animated by the now defunct Manglobe who you may recognize as the studio behind pretty popular shows like Samurai Champloo and Ergo Proxy. Of course, quality animation is par for the course for them which anyone who has seen any of their shows can probably agree with. I think I noticed the animation get a little bit worse towards the end, not sure if the budget was running out or something, but it wasn't massively distracting.

I chose to watch Deadman Wonderland with the English audio track as I am want to do and was overall pretty impressed with the voice acting. There were no dud performances and everyone sounded pretty natural. The standout for me was Monica Rial as Shiro who gave a really great performance and really did a good job portraying how childish Shiro is and just sounded cute. The only real issue with the dub was the fact it seemed to go out of its way to add in as much needless profanity as it can muster and it mostly comes across as really forced and unnecessary, almost like it's some kind of desperate attempt to be edgy or something. Really could have done without it.

I also want to say I absolutely loved the OP to Deadman Wonderland. The visuals are fantastic and the song has been lodged in my brain ever since I started watching a few days ago.

Of all the anime I've watched since I started about 3 years ago, I don't think I've ever seen a show so desperate for a second shot at an anime adaption. There is a good show trying to break out here, it's just buried below so much poor writing and it really is such a shame it turned out this way. I'm not sure I can recommend Deadman Wonderland really, as despite the fact I enjoyed a fair amount of it, it just infuriates me to no end how much of a waste this adaptation is.