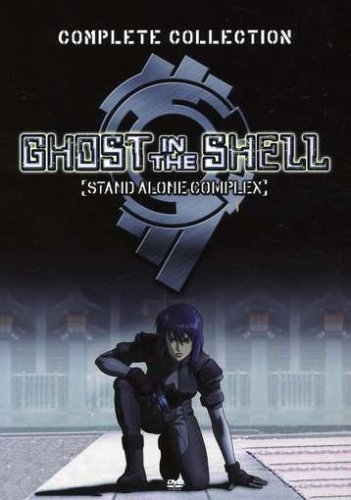 Disappointing. If I had to pick a single word to sum up this series, it would be this one. Around these forums and on various other sites I've seen this show praised to high heaven and, in my humble opinion, it goes right along Samurai Champloo as being one of the most overrated series that I've watched. Okay, I didn't think it was as bad as Champloo, at least I could manage to finish this show but, despite SAC not being a bad show by any stretch of the imagination, I do think if I went in with no expectations at all I might have come out of it feeling a bit more positive.

Right out of the gate I'm going to tackle the biggest issue I had with this show and that was the pacing and structure. For those who don't know, this show is split into two kinds of episodes, Stand Alone episodes, which are stories that are contained within a single episode, and Complex episodes, which have an overarching story. The issue here is there is a huge gap between Complex episodes in the middle of the show where there is about 7 or so Stand Alone episodes between the Complex ones meaning that I had actually forgotten a lot of the details of the earlier episodes since it had been so long since I'd seen them and pretty much no attempt was made to refresh the viewers on previous events. Even now I'm not so sure how those earlier episodes are connected to the string of Complex episodes that conclude the series. This series could have benefitted from ditching the Stand Alone episodes all together or having all the Stand Alone episodes bunched together followed by all the Complex episodes. I feel like this could work a lot better as a movie too, which I'm aware exists, so I'd be very interested in checking that out.

Even if structure of the episodes had been different, this show is still a definition of a mixed bag. The Complex episodes, which tell the story of the Laughing Man case, are excellent and tell a really interesting story that has a lot of mystery elements that can really pull the viewer in as well as a good bit of action on top to keep things interesting. I'll admit, I think that the story went a little over my head in places and that it could take another watch for me to totally absorb everything (Namely why the Muroi (?) vaccine was subdued by the Government when only Serrano was going to benefit and why Serrano sold out the Government despite him profiting from the use of micromachines) but that could just be a personal thing, I'm never been the best at following complex (no pun intended) stories in shows. On the other hand, the majority of the Stand Alone episodes were exceedingly average. Not really good, not really bad, just kind of there. It almost felt like filler. Honestly, with a couple of exceptions (Both of the Batou based episodes) it felt like a chore getting through some of these episodes as I really just wanted to get back to the Complex episodes. There is one episode in particular centered around the Tachikomas (A bunch of robots that help out Section 9) that must have been one of the dullest episodes of any series I've ever seen. It's not very often I clock watch whilst watching a show but that episode managed to achieve it.

Characters in this series also felt like another major stumbling block. Only two out of the eight characters in Section 9 really see any kind of backstory or depth and that's Batou and Togusa. Every other character, including the main protagonist of the show, The Major, got pretty much nothing. Hell, I couldn't even tell you the names of the characters in Section 9 outside of The Major, Togusa, Batou and Aramaki. Whilst The Major is incredibly badass throughout the show, the lack of any real development really hurt her character, especially seeing as she was the protagonist for the majority of the show. It made it really hard to associate or connect with her in any way. There is a part in the penultimate episode where she supposedly dies and I just felt absolutely nothing, and that's pretty bad.

The art and animation in this show is pretty good for the time it was made in. I probably wouldn't have guessed this show is over ten years old at this point and most of the show holds up in this department, god awful looking opening aside. One area I do have to praise profusely is the CGI. Considering this show was made in 2002, the CGI and the way it blends in with traditional animation is almost seamless. CGI in anime has never looked right to me in any show before this one but this show managed to do it in a way that was so unobtrusive you barely noticed. Honestly, I have no idea how a show from 2002 can pull this off yet a show like Aldnoah Zero manages to make it's CGI mechs look like they're from a completely different show.

In summary, I feel like this show is the very definition of a mixed bag. The Complex episodes are worth the price of admission alone, but the chore of the Stand Alone episodes and the lacking characters really bog down a show that could have easily been a fantastic show into one that is merely good.