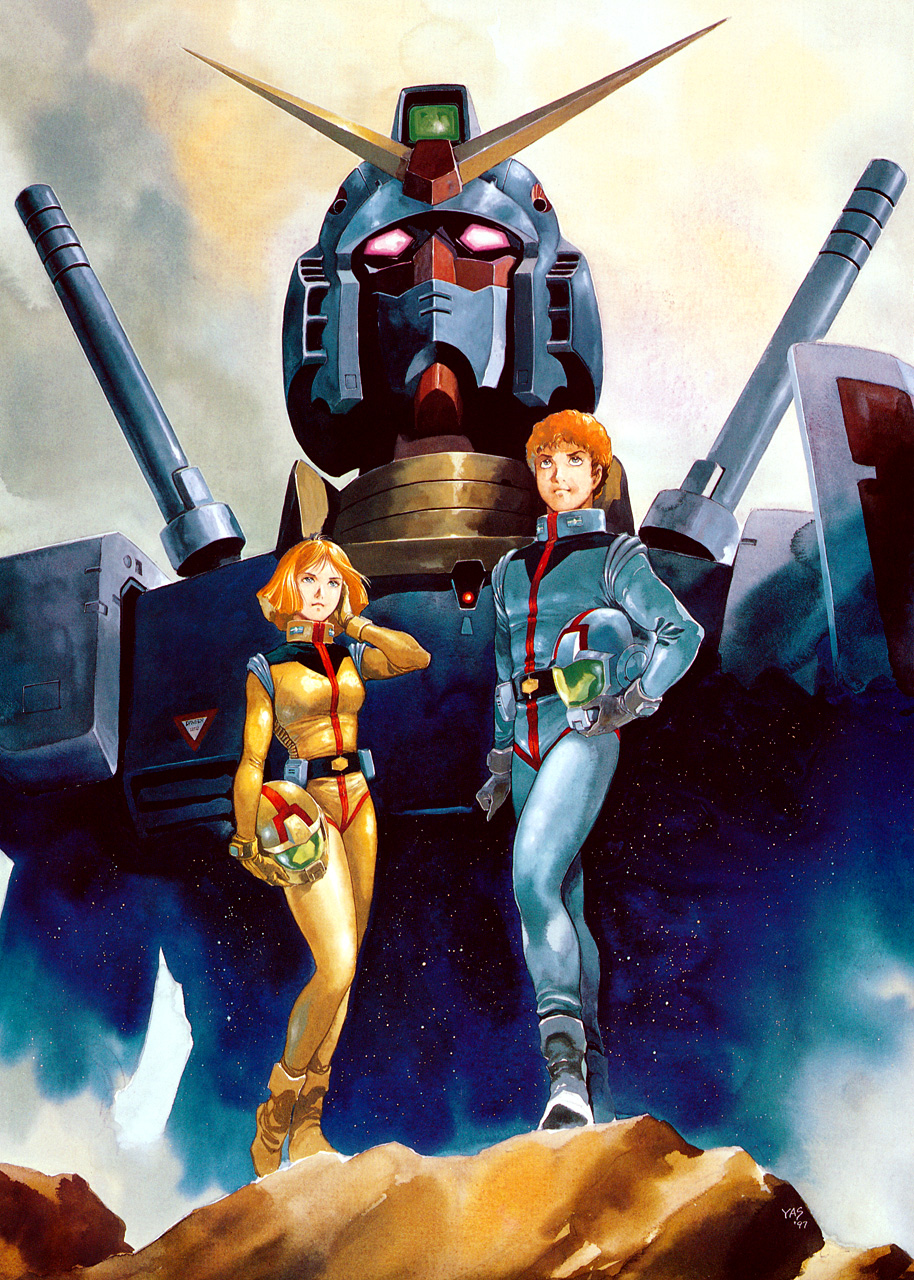 I'm rather adverse to watching older anime. Any show that's made before the mid to late nineties usually is a massive turn off. Generally, I just really don't like the look and character designs of older shows to the point where I find it really takes away from the shows. However, Gundam is something I am interested in. Last year I watched Gundam Seed and found it to be an entertaining but flawed show and I had heard the Universal Century shows were some of the best examples of Gundam shows. So, now I faced the conundrum of not liking older anime but wanting to watch UC Gundam. In the end, I took a gamble and bought Anime Limited's recent blu ray release of 1979's Mobile Suit Gundam, the first entry in the Universal Century Gundam series.

The first thing I immediately noticed going into Mobile Suit Gundam was just how similar the story was to Gundam Seed. I'd say the first quarter of Gundam Seed is beat for beat the same as Mobile Suit Gundam. Of course, given Seed was released more than 20 years after MSG, that's more of a knock against that in retrospect as opposed to this show for being so similar. That being said, the story was kind of mixed for me. I enjoyed the first quarter, which is centered around the crew of the White Base trying to link back up with the Federation forces back on Earth. This was the only time where I felt it was truly interesting as once the White Base goes back to Earth, it just feels like the story goes into a cycle of going to a place, battling then going to another place, battling, ect. I thought this became a little tiresome and wished it did more like Seed did, which kept the story more interesting throughout. That being said, I know I really have to think of this in the context of 1979 when (I'm guessing) anime was still in its early days so I guess I do have to forgive it somewhat. I think what might have fixed this is having less episodes. 43 (or 42 if you're not including the excised Episode 15) just seems very excessive. There was no real reason for it to be so long and they probably could have trimmed to back to 25-30 episodes instead. What I did enjoy though, was the action in the show. Almost every episode is packed to the gills with really awesome looking (and sounding) mech fights and the show is constantly introducing different settings and opponents that prevents the action from getting stale for the most part. Still, by the time I finished this show, I was feeling really burnt out on it and I am in no rush to watch the sequel series, and likely won't for quite some time.

Despite being a bit shaky in the story department, the characters in the show were definitely a lot stronger, for the most part. The crew of the White Base are all pretty great characters and I think the lengthy running time lets you get to know the characters and grow to like them a lot over the course of the show. Granted, I think there are some characters that got a little bit shafted in terms of development like Hayato and Fraw Bow but for the most part I think everyone gets at least an episode or two for development. If I had to pick a favourite, I really liked Sayla. She is just very likable and is the only female who gets to pilot some of the mechs and ships, giving her some great moments where she's in the heart of the action. I also found her backstory to be quite interesting but if I said anymore, I'd spoil it. On the villains side, I also really loved Char, even if he is absent for a fair chunk of the episodes for no real reason. In fact, I do think this slightly hurt the show as the villains who occupy the spot whilst Char is away aren't nearly as memorable or cool or just as good of a character in general really. The only thing I didn't really like in the character department was how romance was handled, just in general. They always seemed super crowbarred in and rushed and often seemed to be there just to add tension to an upcoming battle and were just poorly done and were largely unnecessary.

In terms of animation, MSG actually looks pretty good, especially when you take into consideration the age of it. As I said before, old animation really puts me off but here, after the initial episodes, you kind of just get used to the super outdated and ugly character designs and slightly janky looking animation and stop really noticing it. Whilst there is some bad elements like I mentioned, the action scenes in the show look fantastic. I have no idea why just the general animation looks rather meh but the action looks so good but seeing as the action is probably one of the main reasons you're watching, I'm glad that those parts look so good, especially with the quality of the Blu Ray release from Rightstuf/Anime Limited, making it look as good as it probably ever will.

On the whole, I think I was pleasantly surprised with Mobile Suit Gundam. I wasn't exactly going into it expecting to think it was terrible or anything, but I think I wasn't expecting to be able to get past just how dated the whole thing is but I did and, in the end, I thought it was quite the enjoyable show.