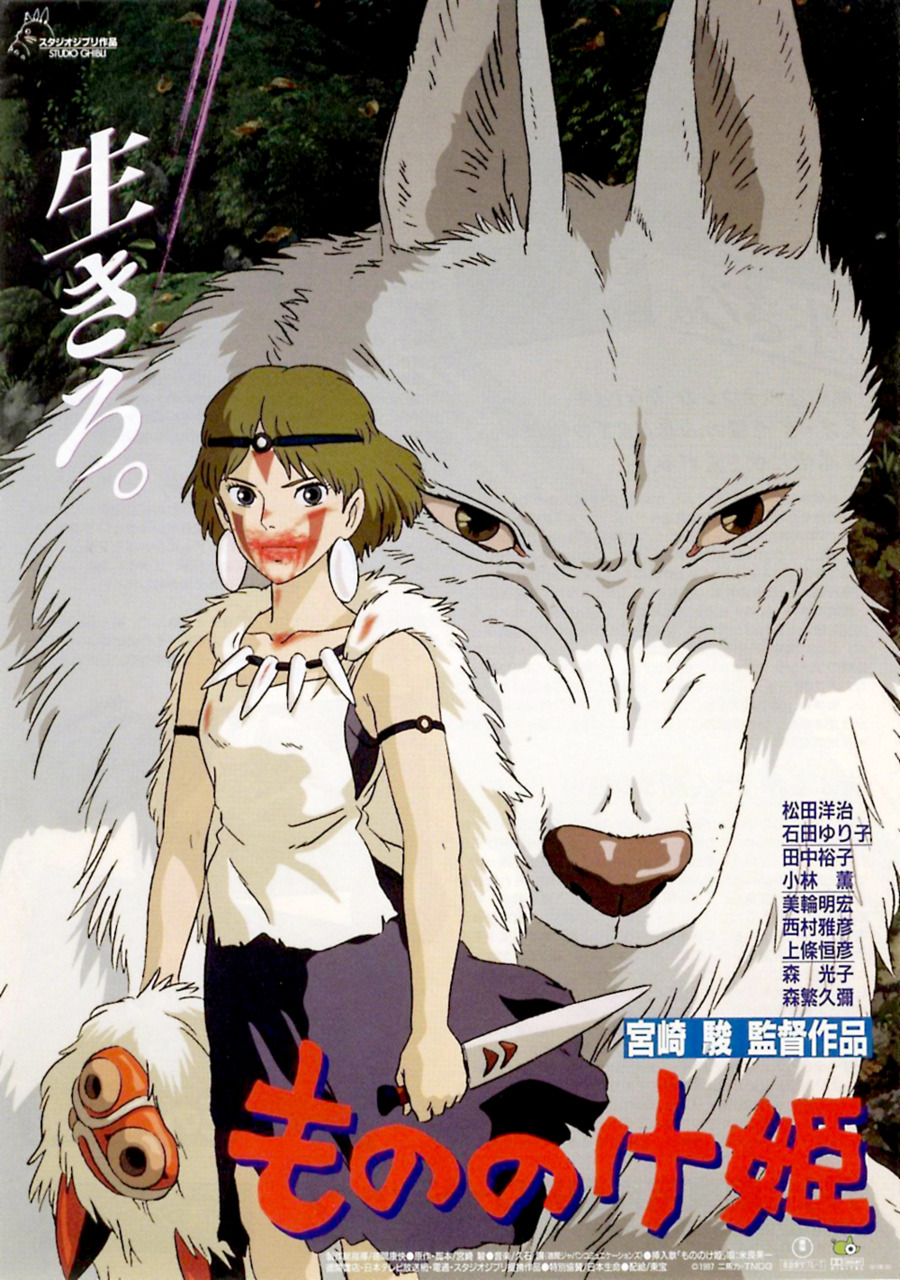 I've been pretty big into anime for about two years now and as such, I think I should be pretty ashamed at the amount of Studio Ghibli's works I've actually seen. Up until today, I had only seen Spirited Away and My Neighbor Totoro and whilst I did really enjoy both, the Ghibli films have just never really interested me a huge deal, which feels kind of sacrilege to say. However, Princess Mononoke did seem like quite an interesting film from what I had seen of it so I bought it on a whim and I just got around to watching it. To sum it up in a sentence, I thought it was pretty fantastic.

The story was what initially got me interested in the film. The two Ghibli films I saw before this one have been rather story light affairs. Spirited Away did have some story but it mostly got sidelined in favour of bath house antics and Totoro was pretty much just a Slice of Life film so, I was quite interested to see what Ghibli could do when they were going for story focus in lieu of character focus. Despite the message being a littleheavy handed, I did find the story to be very entertaining. I really loved the way it didn't really paint either the humans or the forest spirits as good or bad but with both being shades of grey. Sure, the humans were clearly in the wrong, but it was mostly only Eboshi and the hunters who were actively destroying the forest, everyone else in Irontown were just kind of there living in the town and yet still suffered at the hands of the forest spirits. In this way I guess the film had an anti-war message, a message portrayed in a much more subtle fashion than the Environmental message that you kind of get your head bashed in with. Like okay, I get it, it's the main theme of the film but it is very in your face, occasionally to a distracting degree. Something else that piqued my curiosity about this film was the action. Both Spirited Away and Totoro were very action light but this film was quite the opposite. The action here was spectacular to watch and surprisingly violent. I'm genuinely surprised they got away with a PG for this one, there are plenty of decapitations and limbs getting blown off and the like, not to mention the boars and getting blown to all hell in some scenes. How some of the tamer episodes of Bleach still get a 12 and this only gets a PG I'll never know. As an aside, if anyone has any Ghibli recommendations for their more action based films, I'd love to know.

The characters were probably weaker here than in other Ghibli films I've seen. After all, when you've only got two hours to play with you can't have both great story and great characters (Well, you could, be it's hard to strike a balance) so I didn't really mind the slightly less than stellar characters. They were all kind of just forgettable. Ashitaka was just kind of bland although likable enough and San was pretty much the same although I did really like her, I do have a soft spot for kick ass heroines. The supporting cast were much the same although Eboshi was a fairly decent villain, again, because of the grey depiction of her rather than her being straight up evil.

Being a Studio Ghibli film, it goes without saying that this film is gorgeous. Every frame is just a work of art and I honestly cannot do it justice. Especially towards the end with all the stuff with the Forest Spirit is just spectacular to watch and a treat for the eyes. The people over at Ghibli are just masters at their craft. I watched the Blu Ray version on a 4k TV and I'd advise anyone who wants to watch it do the same. Just find the biggest, highest quality display you can possibly find and watch the in HD. I genuinely don't think the DVD could possibly do it justice.

I watched the film dubbed and thought the cast did a pretty good job. Like most other Ghibli films, the voice cast is made up of hollywood actors rather than traditional voice actors, there were no performances that took me out of it. That is one worry when watching a Ghibli film, that I'll recognize some of the actors and it will take me out of it. Although I haven't seen it, I've seen the trailer for Ponyo and I can only hear Liam Neeson's character as Liam Neeson and I feel that would probably take me out a little. Didn't get any of that here though thankfully so all was good.

Overall, I'd definitely recommend anyone watch this film who hasn't. It's spectacular animation alone is worth the price of admission but a great story with fantastic action sequences also make this well worth checking out.